Dangerous Times (side one) 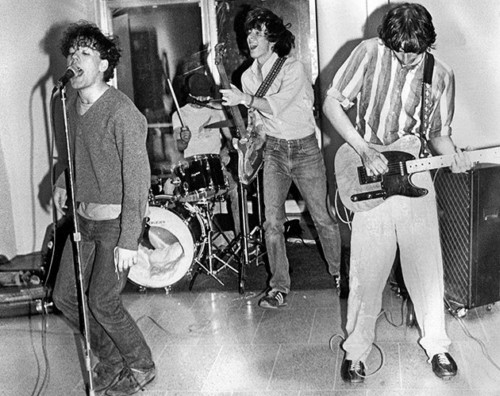 This is something I planned and wrote last year but held back for an appropriate time. As it's Easter - a time associated with rebirth and new beginnings - it's as good a time as any. I suppose you could consider this post a sort of prequel to this one in which we looked at a totally hypothetical pre-'Murmur' debut album. This time though, we're going back even further...

During R.E.M.'s very earliest months in 1980, they wrote a whole host of songs. Most of them were never recorded, and many were long-forgotten by the time they recorded the 'Chronic Town' EP in 1981/2. It was the recording of that record that was my reference point for my pre-'Murmur' project, using songs that were a solid part of the band's live set around that time. However, it did mean a heap of earlier songs didn't get a look in - and that's where I'm coming from with this post.

I've decided to pull together all (or, at least, most) of the earliest self-penned songs R.E.M. performed in their first six months together. One or two of them became rather well known among those who bought their records. The others - well unless you're an uber-fan who seeks out obscure bootlegs from the band's embryonic phase, you won't have heard them before.

I've taken two of the earliest-known recordings of R.E.M. (maybe even THE earliest-known recordings) to provide an almost definitive guide to the band's very first songs. It's in two parts. Today, what is believed to be the earliest recording of the band. In July 1980, the band entered Jackson Street Rehearsal Studios in Athens to practice material for upcoming shows in Atlanta and North Carolina. A tape recorder was present. Eight songs were captured and later surfaced as the very first R.E.M. bootleg, a cassette called 'Slurred'. It's often noted that this recording was made at Wuxtry's, the record shop where Peter Buck worked, on 6th June, but while they did play there on that date, no recordings (if any exist) have ever made it into circulation. It's now widely accepted that this is the Jackson Street rehearsal.

Seven of these songs were performed at that first gig, with Just A Touch making its debut at their second show a fortnight later at the Kaffee Klub, the same day they decided to call themselves R.E.M. (after, fortunately, discarding other suggestions like Negro Eyes, Slut Bank, Africans In Bondage and Cans Of Piss!)

As you might expect, the sound quality isn't exactly top-notch, but I've had a little go at improving things. The opening track Dangerous Times is one of my favourites from the era but is incomplete on the tape - the first line is missing - so I've tried to "fix" it. The opening line is "These are dangerous times", which also happens to be the third line, so a little copy & paste puts that right. The opening snare hit has been added from an early live show at Tyrone's (which we'll get to in a day or two...), so it now sounds whole again, though be warned it is rather rough!. Otherwise, everything is as it appears on that tape, just with less hiss and a tad more oomph.

So here's "Side One" of 'Dangerous Times: the genesis of R.E.M.' presented as a single continuous MP3 as if ripped straight from vinyl. The artwork includes shots of Michael Stipe and Bill Berry at the debut St. Mary's show. Side two will follow on Easter Sunday...